A powerful, ambitious building, above and beyond the scale one would usually imagine for an Edwardian suburb. A crossing tower evokes a sense of primordial importance, but on first approach (perhaps on the 329 bus to Enfield), the eye is caught by the turriform buttresses of the chancel, what with their tiny lead spires look rather like hypodermic needles.

The construction is unashamedly red-brick, but enlivened by flint facing in the upper walls, with flush-work being used on the parapets. The architectural motifs used are predominantly English Decorated Gothic of the mid-fourteenth century. The east window, which has an ingenious curvilinear design (two ogee-headed sub-arcuations supporting a fanning pair of great lozenges), is particularly striking as a climax to the building. 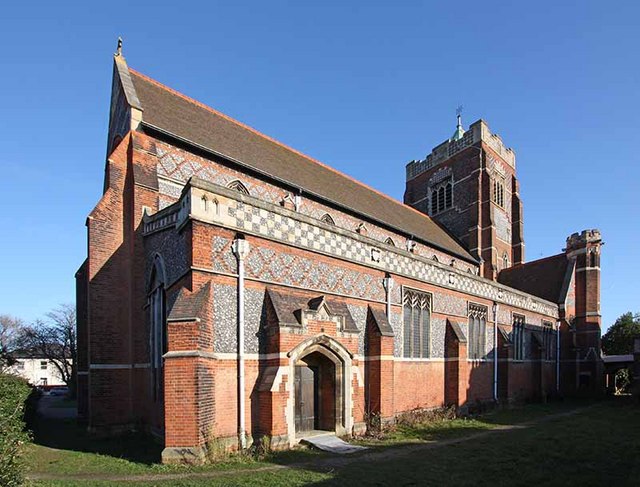 The interior, thankfully unrendered, is more standard Butterfieldian brickwork, but with interesting use of carved stone. Alternating stone and brick sections lead the eye up and down the arches of the arcades, and ogee arches in the spandrels spring a brick supporting shaft up to the roof. The clerestory appears to return onto the west face of the central tower, where seven shallow niches step up around the chancel arch. The spatial impression of the interior is somewhat spoilt by the fact that the chancel is totally screened off for storage and the altar placed west of the tower arch. Yet this remains a jolly, good-natured building: powerful yet approachable, like a well-appointed paddle steamer. It perhaps would feel more at home at the Norfolk seaside than in North London.