St Matthias Church, Richmond was designed by Sir George Gilbert Scott  in 1857-8. The steeple was completed in 1861-2.

The most striking thing about this church is the all-through clerestory, which incorporates small lancet windows into a continuous arcade. This is a thirteenth-century English trope, but only executed in the Middle Ages on the most ambitious parish churches, such as West Walton in Norfolk. Most distinctly un-English is the rounded apsidal chancel with classically French window tracery, and the giant rose window of the west façade. All is very in the manner of northern French cathedrals, or perhaps Westminster Abbey. 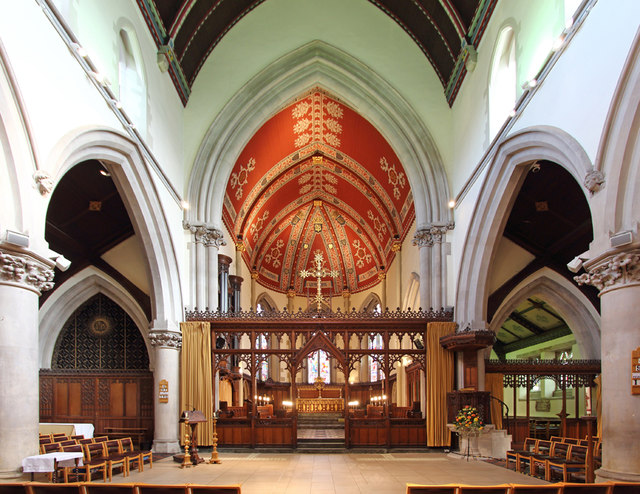 The arcades of the interior are more primal French Early Gothic, tall columns with gigantic capitals wrapped with two bands of stiff foliage. The most striking feature on entering is now the bright ceiling of c.1890, replacing one by Clayton and Bell. Originally the windows contained clear glass, which reminds one that the ritual appearance of the church is somewhat different to how it was intended. The Ecclesiologist – the most polemical of journals – criticised the building:

“The internal arrangements are commodious, but show no great improvement of ritual. The chancel levels are not bad, but there is no screen nor parclose, and the altar stands close to the eastern wall of the apse. There is no reredos whatever as yet, and this unhappily is the very barest part of a somewhat chilling interior.”

The steeple however, undeniably brings warmth to Richmond’s skyline. It is placed on the north-west corner of the church, neither disrupting the rhythm of the clerestory from the south or the harmony of the rose from the west. Solid gabled buttresses clasp the tower’s base, supporting an arcaded ringing chamber and massively tall slender traceried bell openings. There is a detailed frieze at the base of the spire, with foliage, quatrefoils and angels, and the spire itself has rather blunt lucarnes and corner pinnacles that put one in the mind of the English Baroque of Hawksmoor.