This church was built by Sir George Gilbert Scott between 1854-8, in a transitional style from First and Second Pointed to Middle Pointed, of Kentish Rag with Bath stone dressings. It has a strong north-east French influence and is a hall church with apse, west tower, short transept and gabled aisles. Scott also designed an octagonal pulpit in a ‘riot’ of marbles and a font with angels carved by the younger Westmancott. At the same time, he designed the associated vicarage with gables and an angular oriel above a Gothic door. The spire was added by John Oldrid in 1890. It has been called ‘perhaps the noblest and most graceful conception of Sir Gilbert Scott’.

The new St Mary absolutely towers over the old, a small village church of 1563, hardly suitable for an up-and-coming suburb of the capital of the Empire. Scott provided the church that he felt the Middle Ages would have given it: albeit one for reformed prayer book worship, not Roman Catholicism. His point of departure was clearly the great medieval parish church of Grantham. The gabled arcades of the tower, and the massive corner pinnacles around the base of the spire all scream St Wulfram’s, albeit if the whole thing had been built in one campaign, not over centuries.

The lack of a nave clerestory and use of almost cathedral-sized cinquefoil-headed aisle windows also owes to Grantham, although here, rather than three separate gables for each vessel, Scott chose to roof the entire nave in one impressive sweep, with the aisle walls projecting up into with their own roof-pitch. The interior is simple, and surprisingly bright for a hall church. The single-column arcades with lush foliate capitals simply continue at the same height through the transepts, leaving open space above as the roof returns to the full-height gable of the transept.

The apsidal chancel has unusually lavish sculpture of musical angels set in Italianate split-cusped quatrefoils on the soffits of its lower, two-bay arcade. Ending this building with an apse – rare in medieval England – does not in any way diminish Scott’s excellence in channelling the third quarter of thirteenth century as emblematic of Victorian Anglicanism. 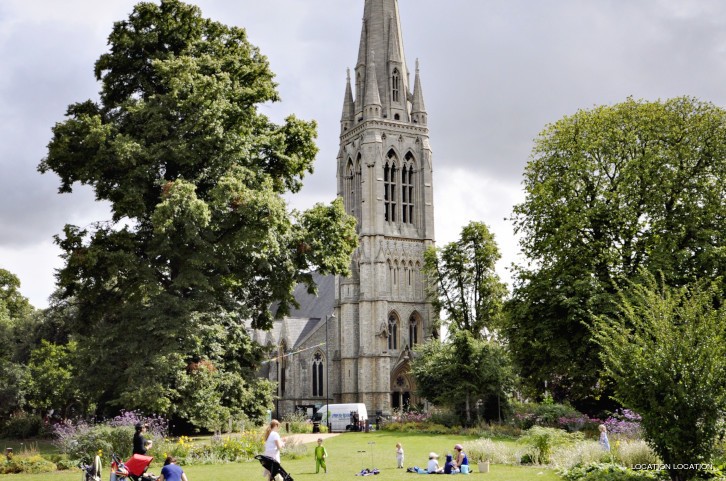