St Mark’s Church, Worsley was designed by Sir George Gilbert Scott in1843-6. Construction was supervised by George Evans. A north aisle was added 1851.The spire of St Mark, Worsley is familiar to many Mancunian commuters as they drive past on a flyover of the M60 orbital motorway in a way that the original architect could barely imagine. The steeple is the most memorable part of the building: the broach from the square tower to the octagonal spire facilitated by pinnacled flying buttresses that demonstrates, even at a glance while being undertaken by an Audi, this is a building using medieval English Gothic at its exuberant heights.

The style is more floridly English parish-church Gothic than G. G. Scott’s later works, only the nave being in what later would become his trademark of cool, pious Geometrical. Instead, the mode is taken from the swagger of parish churches of the second quarter of the fourteenth century in Lincolnshire. The buttresses topped with crocketed gables are a particular nod to churches like Heckington. 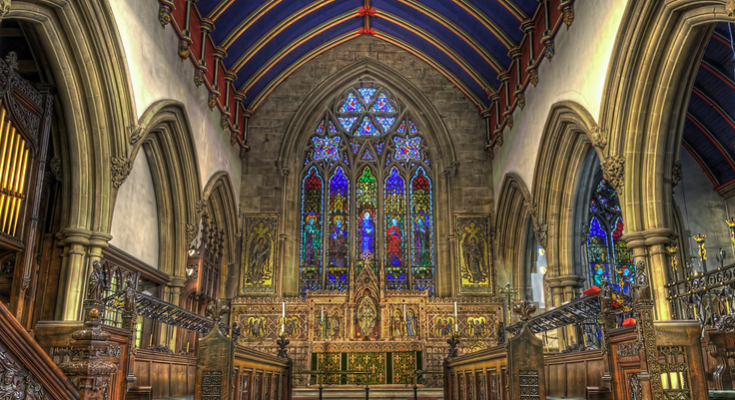 The buttresses of the south chancel chapel are emblazoned by hanging shields, demarcating it as the family chapel of the generous benefactor of the building, Lord Francis Egerton. While this chapel uses stock medieval tracery (impaled trefoils), the E façade incorporates the device of Kentish split-cusp tracery, a sign of a desire for variety from a patron with no expense to spare. Scott’s office returned in 1851 to add a north aisle, but for all his nods to the stylistic progression of the Middle Ages in the building, it is identical to the south.

The interior has less incident, but the proud arcades contain much vibrant foliage, and some Eucharistic emblems. The chancel, at three bays deep, is quite large for this date, but the High Victorian streaky-bacon alabaster reredos disguises the fact that, when built, this was a church built for broad, thoroughly prayer-book Anglican worship, not high smells-and-bells. 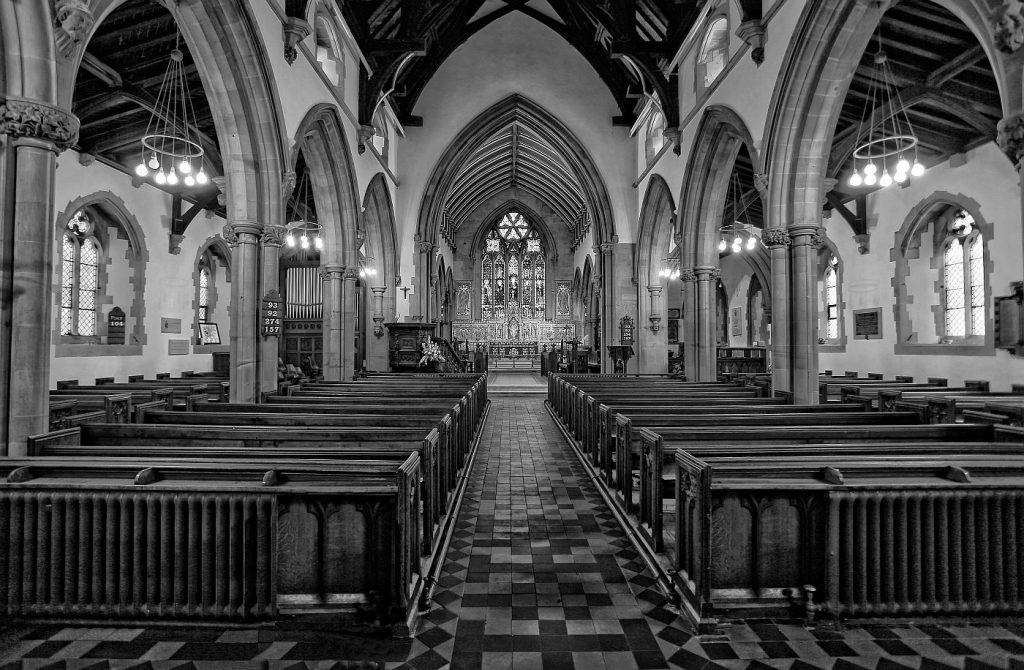 Ian Toplis wrote the following on this church:

Towards the end of 1843, Lord Francis Egerton (1800-1857), the M.P. for South Lancashire, asked Sir George Gilbert Scott to design a church for his colliery village of Worsley, to the west of Manchester. In 1833 Egerton had inherited a vast fortune from his great-uncle, the Duke of Bridgewater, and now proposed to use some of his inheritance to provide a church which would not only improve the spiritual welfare of the people of Worsley, but also act as a focal point in the beautification of the village. The site that Egerton proposed for the church was on a low hill above the basin that the Duke had formed at the entrance to his colliery. On 22 November 1843, Scott sent a sketch to Egerton showing a large church, with a spire at the west end, a deep chancel, and a south aisle and porch. It is all in a plain lancet style. The laying of the foundation stone took place amid great celebrations on 14 June 1844, as it was also the day of Egerton’s eldest son’s twenty-first birthday. This was obviously a pre-arranged date and may have had little relevance to the actual building programme as the church was not consecrated until 2 July 1846, by which time it had been transformed from the plain building shown in Scott’s sketch to a highly ornate early Decorated style church.

How Sir George Gilbert Scott obtained this commission is not clear. Egerton was already employing Blore to build nearby Worsley New Hall and a parsonage to the north of the site of the church, both in his characteristic Elizabethan style. However, in 1843 The Ecclesiologist condemned Blore as ‘entirely unaquainted with the true spirit of Pointed Architecture’, while Scott was enjoying his brief moment of favour among the Ecclesiologists. Blore was anyway nearing the end of his career, and in view of his selection of Scott for the Camberwell church, perhaps suggested Scott’s name to Egerton. Scott would certainly have read Pugin’sTrue Principles of Pointed or Christian Architecture , when it appeared in 1841. There Pugin states as his first principle ‘that there should be no features about a building which are not necessary for convenience, construction, or propriety’. In his letter to Egerton, of November 1843, Scott seems to paraphrase his hero when he says that it was his wish ‘to introduce no feature but what has its use and no ornament which is not part of an essential feature’ and that he had preference for ‘substantial construction to external decoration and Simple reality to shewy pretence’. But the church was actually built in a highly ornate Decorated style.

Ten days after the foundation stone jollifications, Scott went abroad for the first time, and while the work was in hand, he was abroad four times in connection with St. Nicholas’s Church in Hamburg. The supervision of Worsley was left to the Clerk of Works, George Evans, with Moffatt presumably making periodic visits. The long building period may reflect delays caused by the amount of carved decoration and the lack of Scott’s personal supervision, although it may also reflect changes in style. Egerton would certainly have approved the changed style, and may even have instigated it. Three days before the consecration of Worsley Church on 7 July 1846, there was another family celebration, when Egerton was raised to the peerage as the Earl of Ellesmere. He eventually bore the entire sum of £7,727-8s-10d, required to build the church, including Scott’s fees of £250. The south choir aisle was designed as a family chapel, but the north aisle to the nave was not added until 1851, at a cost of £4,000, again at Ellesmere’s sole expense. The Earl died in his London home on 18 February 1857 and his remains were carried back to Worsley.

The reredos was erected in St Mark’s to the memory of the first Earl’s wife, who died in April 1866. This extends across the full width of the chancel and is a typical Sir George Gilbert Scott design in alabaster inset with polished coloured stones surrounding panels of glass mosaic, which are very similar to those that Salviati of Venice was making for the Albert Memorial at that time.