The small medieval parish church of Camberwell had been much “improved” by eighteenth-century windows and appears to have had a small modern apse rather than its medieval chancel. It was the sort of thing that Scott or one of the other Gothic giants would have restored and greatly expanded in the later nineteenth century had it not burned down in 1841.

The vestry decided to hold a competition for the design of a new church, and appointed Edward Blore (1787-1878) to act as assessor. Blore was by now one of the most distinguished members of his profession, having been appointed in 1831 ‘special architect’ to King William IV, to complete Buckingham Palace. However, it was as a topographical draughtsman that he had built up a considerable knowledge of Gothic architecture. The Camberwell vestry clearly wanted a Gothic design for their new church, so Sir George Gilbert Scott competed and Blore chose him for the work. Scott won the competition for its replacement with a design he greatly revised before the final building.

This was the last of a trio of major competition victories which came in quick succession, the Martyrs’ Memorial in March 1840, the Wanstead School in early 1841, and now the Camberwell Church, later on in the same year. They combined to establish the partnership as among the leading architects of the day. ‘Moffatt’s head was turned’ according to Scott, by his Wanstead success, but Scott probably viewed St. Giles with even greater satisfaction. This was to be a large parish church, within a few miles of the centre of London, serving a large and growing population, including many families of the status of the Ruskins, who lived a mile-and-a-quarter away, at Herne Hill. John Ruskin himself, although still at Oxford, was already establishing himself as a critic and would certainly have known about Scott and Moffatt from the Martyrs’ Memorial.

This was the largest church that Scott had designed so far, with a nave, transepts, a long ecclesiologically correct chancel and a central tower with a thin broach spire nearly two hundred feet high. The late Early English style used, as Pevsner states, ‘is rather raw … not yet as refined and competent as Scott was to be later’. The church was built of Sneaton stone from north Yorkshire with Caen stone dressings. Scott remarks that ‘Our great mistake in the church was the use [of] Caen Stone an error fallen into by many at that time & later’. This pale grey stone, which is easily worked, was very fashionable in the 1840’s and 1850’s as a substitute to the Portland Stone used on so many, by then, discredited Georgian buildings. In fact Caen Stone had appalling weathering properties and when Blore used it on the new east facade of Buckingham Palace in 1850, it started dropping off only three years later, causing considerable alarm. Scott originally chose terracotta for the vaulting of St. Giles, probably because of its light weight, but it was eventually omitted in an effort to reduce costs and Scott never seems to have specified it again, even though it became fashionable in the 1870’s.

Scott ‘greatly admired’ the incumbent, the Reverend J. G. Storie, ‘and, to a certain extent respected while I feared him for he was a man whose very look would almost make one tremble when his wrath was stirred. He was determined to have a good church.’ It was little wonder that poor Scott found his attendances at the committee meetings terrifying experiences.

Work did not start until late 1842, when the foundation stone was laid. Cox, who had carved the Martyrs’ Memorial, carried out the work, which according to Eastlake, was ‘better in design than execution, being coursely cut in parts’, and Scott thought that the human heads were ‘detestable’. Consecration took place on 21 November 1844, and the building received widespread publicity, with an illustration in the Illustrated London News and notices in The Gentleman’s Magazine and The Ecclesiologist. Scott had sent a lithograph to the latter and must have been delighted when it described St. Giles as ‘On the whole a magnificent work’, while Ruskin called it ‘a pretty church’. If, according to Scott, ‘no one had an idea whose our plans were’ when they were submitted in the competition for St. Giles in 1841, they certainly would have known who Scott and Moffatt were when the building was consecrated three years later.

This is perhaps the first replacement of a damaged parish church since the Reformation that has the confidence to make a statement above and beyond its predecessor. In scale it absolutely dwarfs the old church, which could probably have fit inside the three-bay chancel. A central tower with spire – something that often seduced the Middle Ages – is also a feature that marks out Scott’s plan as extremely ambitious, as any structural failure could be catastrophic.

The nave surprises one familiar with Scott: it has rather ham-fisted plate-tracery, and the blank trefoil arcading either side of the south clerestory windows (since the north is the “back” of this church, clearly they were ditched for cost) is a little bit dodgy. This contrasts with the seemingly effortless Gothic classicism of the east arm: the transept windows whipped straight from Westminster Abbey, souped-up a little for the east window. Arguably, this is the building that made him heir apparent to A.W.N. as the supreme high priest of Middle Pointed. 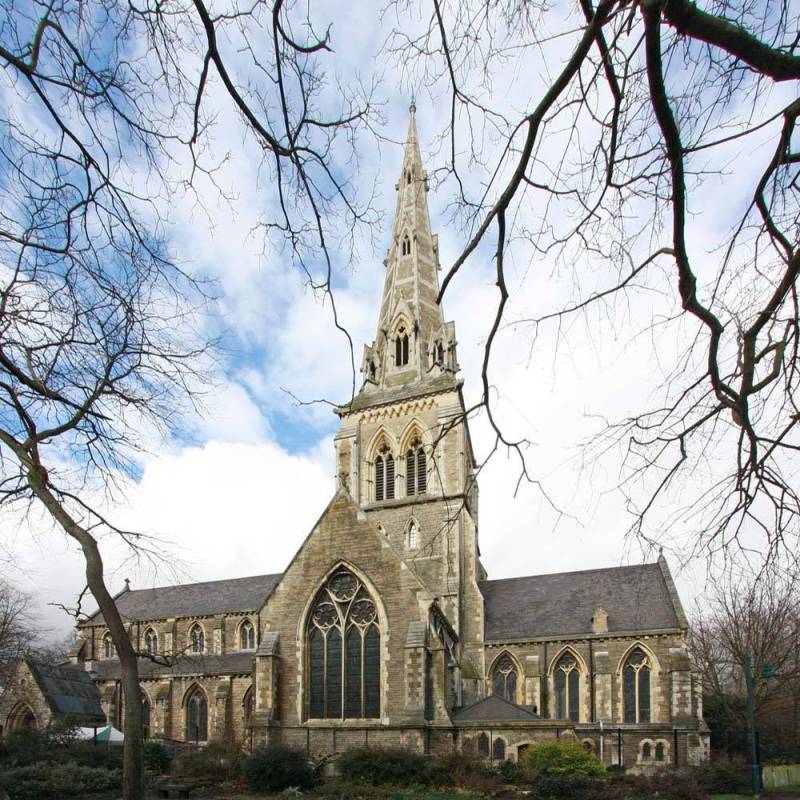