St Asaph is the smallest cathedral in England and Wales. A Norman cathedral built in 1143; the E.E. choir was probably constructed ca. 1239. Attacks by royal troops in 1245 and 1282 resulted in a rebuilding programme thought to have begun in 1284 by Bishop Anian and to have continued until 1381. The irregular changes in the masonry especially to the transepts seem to result from retention of considerable amounts of original fabric. The major part of this work has been dated ca. 1310-20. The central tower was added 1391/2. The cathedral was burnt 10 years later by Owain Glyndwr; restoration was completed under Bishop Redman in 1482. Periodic improvements were made over the following centuries after damage done by the Civil War and the top of the tower being blown down on 2nd february 1714. 1778/9 saw the demolition of the Chapter House and the choir was remodelled probably by Joseph Turner. The full restoration of 1867-75 by Sir George Gilbert Scott, assisted by H J Fairclough, removed many of the 18th and early 19th century alterations, particularly to the choir. Futher restoration by C M Oldrid Scott, mainly to the tower, was carried out in 1929-32. The vestry wing was added during the 1956-70 restoration. The cathedral is a cruciform church consisting of a nave and aisles of five bays, transepts, choir and a central tower. The nave has a timber ceiling, heavily ribbed to suggest a lierne vault – a fine example of early 14th century work. A course of stones laid on end at about impost level could suggest the original height of the Norman building. The chancel retains exceptionally fine late 15th century stalls, the only surviving canopied examples in Wales, possibly by William Frankelin. There are tall, vaulted and crocketed canopies with pinnacles and carved foliage, elbow knobs and misericords; colonettes to the front were inserted in 1906. G G Scott lined the choir with mainly red and beige ashlar and inserted panelled wagon ceiling with rose bosses. 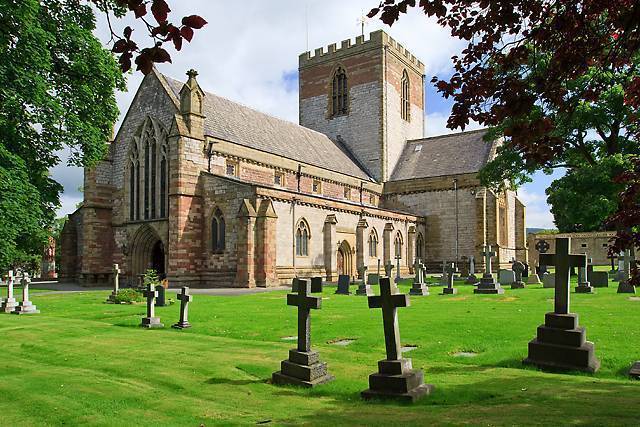 The problems of funding which Scott encountered at Bangor did not occur with his restoration of St. Asaph’s Cathedral. Although only thirty miles from Bangor, the diocese is closer to the industrial areas of England, particularly Liverpool, and it became an area of tranquillity to where the wealthy industrialist could retreat with his family away from the smoke and grime. Scott, as a fashionable London architect, received a number of commissions in the area around St. Asaph even before he had started on Hafodunos for Henry Sandbach in 1861.

Scott started work on the cathedral of St. Asaph in 1864, when he designed replacement tracery for the east window which had contained a crude Geometric design of about 1780. Scott’s new window was a memorial to Bishop Carey and his wife, with tracery in the early fourteenth century Curvilinear style. It must have been about the time that Scott produced his first report on Bangor Cathedral that he also made suggestions to the Dean and Chapter of St. Asaph as to how their cathedral could be restored. Freeman had inspected the cathedral in 1854 and thought that it was ludicrous that the nave was vacant and the choir choked with seats. Scott concurred, saying that the choir was:

occupied by the congregation whose wants increasing have led to the addition of pew upon pew, till the very altar itself is invaded and scarcely allowed room to exist, while the nave and transepts are comparatively if not wholly useless for any purposes of worship.

This was the main reason for Scott’s involvement. But clearly, as with St. David’s and Bangor, there was a need to re-assert the place of the Church of England as the main religion of the people of Wales. Scott was expected to make the cathedral into an appropriate setting for the post-Oxford Movement form of Anglican worship. In fitting it out he was able to provide the wealthy inhabitants, such as the Glynnes and Gladstones at Hawarden, the Bamford-Heskeths at Gwrych Castle, and the Sandbachs at Hafodunos, an opportunity to display their wealth in a morally acceptable way.

The cathedral was founded in 1143 but only completed in its present form in 1391 with the addition of the central tower. However, in 1402, Glendower carried out one of his devastating raids on the building and it was not until the late fifteenth century that it was fully restored. Today the cathedral is basically a medieval building with an Early English choir, a Decorated nave and transepts, and a Perpendicular tower, with some excellent choir stalls surviving from that period. In 1822 Lewis Wyatt, the nephew of James Wyatt, installed plaster ceilings in the nave and transepts. His ceiling to the nave was an immense barrel-vault that came so far down the nave walls that it obscured the clerestory windows as well as producing an echo. A meeting was held in the Chapter Room on 26 July 1866, at which the Bishop presided. The Glynnes and the Mainwarings played leading parts in the proceedings, with Sir Stephen Glynne seconding the motion to launch the fund and Townshend Mainwaring, with Sir Stephen’s brother, proposing and seconding respectively, the motion to set up a restoration committee. The Glynne and Gladstone families promised £151, the Mainwarings £60, and Henry Sandbach £10. Lord Dudley promised £250 on condition that it was matched by another layman, but the largest contributions came from the clergy, with the Dean promising £400, and the Bishop donating £200 for two windows. By December 1870, £5022-19s-2d had been raised, which roughly accorded with Scott’s estimate.

Perhaps the Dean and Chapter of St. Asaph were anxious not to embark on the wholesale rebuilding that Scott was carrying out at Bangor, and Scott wrote long peevish accounts against their decision not to allow him ‘to explore the old walls first’. He said that the exterior of the choir had been renewed in ‘costly stone but horrid architecture’, with:

not the smallest trace of its old design being left. There were early prints of it and from these I made a design for its restoration – but accompanied it by earnest advice not to act upon it till the old work had been stripped of its modern concealment, & evidences of its original design searched after. This Dean and Chapter ignored saying that they could not have their cathl disturbed earlier than was necessary & I in an evil moment of weakness yielded I introduced two couplets on either side as closely as I could from the prints – when at length, in approaching the central tower to our dismay the old details made their appearance …

These he faithfully restored, ‘but the others remain monuments of weak compliance – & beacons to warn others against such foolish conduct’. Scott’s new windows so closely resemble the old ones that he discovered that his pique at being denied the opportunity to indulge in one of his architectural jig-saws seems quite unjustified when looking at the final effect.

Internally, he did away with the 1830’s stone screen, with the organ on top, and moved the stalls under the tower. These are the only surviving medieval canopied stalls in Wales, which he restored, adding some new stalls and designed a new bishop’s throne. Two sets of steps were introduced into the choir and the sanctuary was paved with decorative encaustic tiles and bands of Anglesey marble. New oak ceilings were formed over the choir and under the tower and Scott reconstructed the sedilia on the south side of the sanctuary from fragments that he had discovered.

Robert Bamford-Hesketh (1826-1894) of Gwrych Castle decided to donate the reredos at a cost of £600. This is a magnificent design in alabaster with marble colonettes, and was carved by the man whom Scott called Street’s ‘hand-piece’, Thomas Earp (1828-1893), who finished it in 1871. There was, it seems, a pause in the restoration to enable further funds to be raised for the nave, where Scott had recommended the removal of Wyatt’s plaster ceiling. Funds were again rapidly forthcoming and the work restarted in about 1874. Scott reopened what he called the ‘curious’ square clerestory windows, which Wyatt had covered, on the south side and on the north side he reinstated similar windows which had disappeared. He said that his timber ceiling had ribs that follow the pattern of the ribs at York, but unlike York, his ceiling is flat-sided rather than arch-shaped.

On 17 June 1874, Sir Stephen Glynne suddenly died. An appeal was launched for a memorial and Scott was commissioned to design new north and west doorways to the cathedral to commemorate Glynne’s involvement in the restoration. He had helped to organise the original fund-raising, was a generous contributor and with a life-long interest in old churches, it is said that he personally surveyed and made notes on the architectural details of 5,530 English churches. He was probably deeply involved with Scott’s restoration but as Gladstone described him as a man of ‘remarkable modesty’, it is not surprising that it is difficult to ascertain what he did. After nine years Scott’s restoration was complete and a grand re-opening service was held on 2 September 1875 with sermons in both Welsh and English. 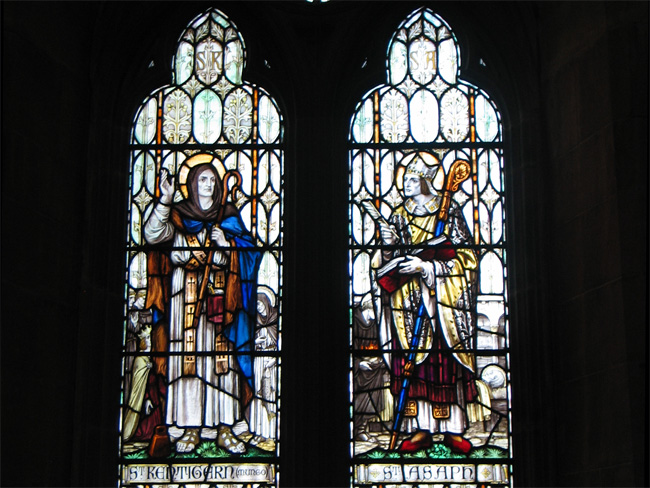