Skidmore was originally a designer and maker of church plate in partnership with his father, and Sir George Gilbert Scott probably first employed him to provide metal-work for his restoration of Holy Trinity, Coventry, between 1855-6. The quality of his craftsmanship so impressed Scott that he rapidly became Scott’s favourite metal-worker and he used him on most of his important commissions. Scott wrote in the Remarks that Skidmore was ‘so well known for his skill in iron and brass-work, as well as in the use of precious metals’ and that he ‘can claim an eminent place both in skill, progress and eccentricity’. His work for Scott included the Albert Memorial, Worcester, Hereford, Lichfield, Salisbury, Exeter and Chester Cathedrals. In 1866 he was elected an honorary member of the Spring Gardens Sketching Club. 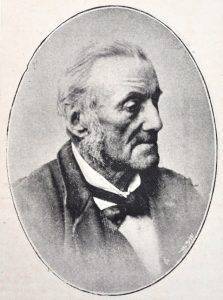