George had a lonely upbringing.

Unlike his elder brothers, who both went to Cambridge and later entered the church, George was not perceived as clever enough to go to university. Money was tight and his father, to supplement his stipend, ran a small private academy for young men wishing to enter the Church of England. The family were ostracised for their low-church leanings (George’s aunt Gilbert had once been kissed by John Wesley which she esteemed a great privilege) and the only other guests were evangelical neighbours who came to Gawcott to hear his father preach.

Apart from lessons administered by his brothers and occasionally his father, George was free to explore and sketch the architecture of the neighbourhood – fine mediaeval churches such as Hillesden and the splendours of Stowe.

Aged 15, he was sent to stay at Latimer with his aunt Elisabeth and her husband Rev. Samuel King a broadminded man of wide interests – astronomer, wood turner, a glass painter, a brass founder, a devotee of natural sciences…. This intelligent, likeable but childless couple, living in a fine eighteenth century rectory in the attractive surroundings of the Chilterns in marked contrast to the gloom at Gawcott, introduced George to the major books on architecture and set him on the road to his future profession.

On his return to Gawcott, a travelling Bible salesman recommended a prolific hymn writer (Lead us, heavenly father, lead us) and uninspiring religious architect – James Edmeston – who agreed to take the young George into his office in Homerton, East London. During the four years of his apprenticeship, George learnt the practicalities of building, read extensively in Edmeston’s well-stocked library and visited and sketched ancient buildings of interest in London and on the walks home to Latimer and Gawcott and to see his brothers in Cambridge.

His early jobs, at the age of 20, including superintending the building of Hungerford market and working on detailed working drawings for Fishmongers Hall against which builders could tender – a then new approach to construction.
Early commissions were a house in Chesham and the vicarage at Wappenham in North Buckinghamshire where his father was, at the time of his death, the incumbent.

Introduced by a friend to the potential of workhouse building following the Poor Law of 1834, George entered into partnership with the son of Edmeston’s builder, W.B.Moffatt, a remarkably gifted self-made architect originally trained as a cabinetmaker, with whom he went on to design 40 workhouses and Reading gaol later to house Oscar Wilde.

They also started building churches in the new Gothic revival idiom. George was trained in the classical style practiced by established architects such as Nash or Soane, but as a young man he had visited St Wilfred’s, Hulme one of Pugin’s early masterpieces, which showed that, by skilful use of gothic idiom, an economic way could be found to escape from the straight-jacket of the then current Commissioners’ style of value for money, plainness and lack of ornament galleries in churches with galleries but without chancels.
George’s first church, designed for his uncle Samuel King at Flaunden in Buckinghamshire, was part financed by the ICBS who were to go on to contribute to several of his later churches.

The Martyrs’ memorial in Oxford, glorifying protestant resistance to Bloody Mary was financed by subscription among low-church enthusiasts to present a prominent protest against the high church Oxford movement and as such attracted the particular ire of the Roman Catholic Pugin.
George won the competition thanks both to his detailed knowledge of the three surviving Eleanor crosses and particularly the one at Waltham on which the monument was to be based and also to his family’s well-known support for the evangelical wing of the church. He went on to open a disused quarry to provide the stone. 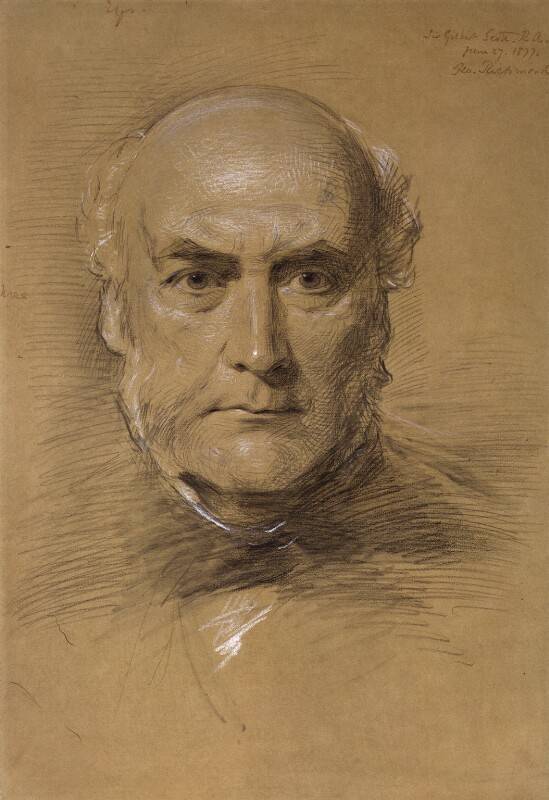 His professional name was made when, at the age of 33, he won the international competition to rebuild the St Nikolaikirche in Hamburg. George spent a preparatory two months visiting German churches and sent off the plans by steamboat in December 1844. Ice on the Elbe meant that they arrived three weeks late, but were accepted nonetheless. His design was for a huge, cathedral like church with a 150 metre spire (taller than any building in Britain at the time) designed in the C14th ‘Alt Deutsche’ style. Despite intensive lobbying by George and his friends, the committee initially preferred a local architect who proposed a Romanesque / Byzantine mixture with a Brunelleschi dome, but this was overturned by popular, evangelical support for the Englishman’s ‘purer’ German design. George was to be still working on this project when he died. 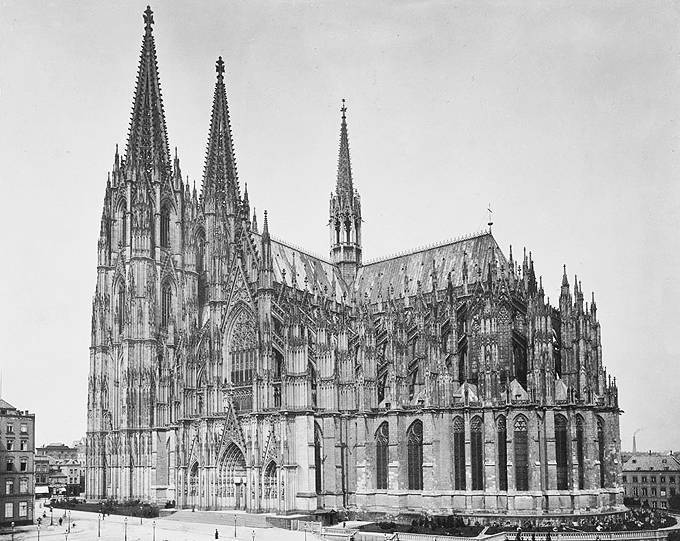 In 1845 Caroline, without consulting George, instigated the end of his partnership with Moffatt,

‘an ugly man with hair all over his head’

who had become prone to rudeness to clients, drink and financial speculation and was later to be imprisoned for debt.

George went on to become architect to Westminster Abbey, was active in all English cathedrals but two, built or restored hundreds of churches, designed the Albert memorial (where at the insistence of the Queen he appears discretely next to Pugin), the Midland Hotel, offices in Whitehall….

George’s success stemmed from hard work, perseverance, a detailed knowledge of mediaeval buildings, an understanding of the importance of lobbying and a large professionally staffed office, the biggest in Europe and then a novelty in the architectural profession. This enabled him to handle a multitude of commissions at the same time (103 during 1867!) and to train a large number of young architects including G.E. Street, G.F. Bodley, John Micklethaite and George’s two sons, John Oldrid and George junior.

As one of Britain’s most prolific architects he suffered during his lifetime much criticism: from Palmerston, who following a decade of patient opposition to George’s designs, when at last Prime Minister, was able to impose a classical idiom in Whitehall; from the proponents of Gothic who felt that by giving way George had betrayed the purity of his style; from William Morris and fellow pre-Raphaelites who founded the SPAB as a reaction against his over restoration of Tewkesbury Abbey; from John Ruskin, who refused the RIBA’s gold medal while George was its president….

The ultra sensitive George, a modest, kindly man, found these attacks hurtful and totally unjustified maintaining that, while the occasional mistake may have been made, he had created many fine buildings and done much to preserve the country’s mediaeval heritage.

George married Caroline Oldrid in 1838 at St Botolph’s Boston where his father-in-law was a prominent draper, the third sibling to marry a child of Thomas Scott!

Their first married abode was the office at 20 Spring Gardens (now part of the Windmill theatre). At the time the area was in turmoil with Trafalgar Square still being laid out, the National Gallery incomplete and work just starting on the rebuilding of Westminster Palace. The Scotts worshipped actively at St Martins-in-the-Fields where Henry Hoare (of Staplehurst) who also had a house in Spring Gardens, was churchwarden. They banked at Cocks, Biddulph at the top of Whitehall.

In 1844 they moved to a semi-detached regency villa in Avenue Road (since demolished to build what is now n° 23), an agreeable walk across the park to the office, with an excellent omnibus service and convenient for the new main line termini on Marylebone Road. Stabling was therefore not required nor its attendant disruptive personnel – another attraction for the families of

It was here that George carried out experiments in the concrete foundations for his church in Hamburg.

The increasing suburbanisation of St John’s Wood, Caroline’s health and George’s continued success led them to move, in 1856, to the Grove, now known as Admiral’s House, in Hampstead, a large rambling romantic house, painted by Constable and later to be lived in by John Galsworthy in an attractive, but then, still isolated part of London. The Scotts, after 18 years, had to give up their regular worship at St Martins and their good friend the vicar Rev. Sir Henry Dukinfield whose name they adopted for their youngest boy a future reputed botanist, fellow of the Royal Society and keeper of Kew Gardens.

The move was not the success anticipated, Caroline did not like the house, transport was onerous, social life difficult and the climate cold. Eight years later they moved to the Manor House in Ham, a large, comfortable Georgian house with an extensive garden and an enclosed access for carriages.

Caroline’s taste for grandeur pushed the family to move again to the Rooks Nest near Godstone, a large house with plenty of room for their family and ten servants set in 170 acres of Parkland with lake, boathouse, gasworks, ice house, stable block and large conservatory. It was here that Caroline died.

George, who had suffered a massive heart attack eight years earlier, himself died in 1878, aged 66. His coffin, followed by 38 carriages, was drawn along the Cromwell Road, down Grosvenor Place and along the still unfinished Victoria Street to be buried in Westminster Abbey in a grave, which he would have been pleased to learn, unearthed some of the earliest Roman remains discovered in the cathedral. A brass plaque engraved by his pupil G.E. Street marks the spot.