A sculptor, born in humble circumstances in Dove Dale on Beresford Hope’s estate. Hope brought him to London and placed him with Clayton. He also studied in Paris. He was nominated by Sir George Gilbert Scott to work on the Albert Memorial, modelling the figures on the fleche and also executed 60 figures on the west front of Salisbury Cathedral for which Scott remarked ‘I fear too low a price’. He subsequently died in poverty. 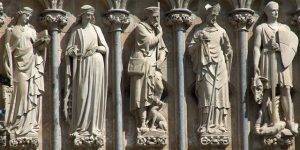