Martyrs’ Memorial is a stone monument in Oxford, England. It was designed by Sir George Gilbert Scott as a commemoration to the 16th-century Oxford Martyrs, three protestants who were tried for heresy and burnt at the stake in 1555.

Marty’s Memorial can be found where Broad Street meets St Giles. The appearance is akin to an ornate church spire. The design of the monument is based on the Eleanor Crosses Edward I erected. Edward erected the crosses in memory of his wife.

Scott was commissioned to design the monument 300-years after the events it commemorates. The monument is intricately carved from stone, with three figures nestled into the niches. These are the Anglican bishops Hugh Latimer, Nicholas Ridley and Thomas Cranmer. The monument shows Latimer facing west, Ridley facing east, and Cranmer facing north. Latimer has his arms across his chest. Ridley holds a bible.

The figures, which are a lighter colour to the monument body, are carved from Caen stone obtained from Canterbury Cathedral. The monument body is carved from magnesian limestone. Scott requested contrasting materials to highlight the figures it commemorates. The monument sculptor was Henry Weekes, one of the most successful British sculptors of the mid-Victorian era, although he is best-known for his portraiture.

The base of the monument has the following inscription:

‘To the Glory of God, and in grateful commemoration of His servants, Thomas Cranmer, Nicholas Ridley, Hugh Latimer, Prelates of the Church of England, who near this spot yielded their bodies to be burned, bearing witness to the sacred truths which they had affirmed and maintained against the errors of the Church of Rome, and rejoicing that to them it was given not only to believe in Christ, but also to suffer for His sake; this monument was erected by public subscription in the year of our Lord God, MDCCCXLI.’

Despite its grandeur, Martyrs’ Memorial was created to warn the public against neo-Catholicism. The events that unfolded in 1555, reimagined in a monument, served as a stark reminder that the founders of Anglicism had died for their beliefs. 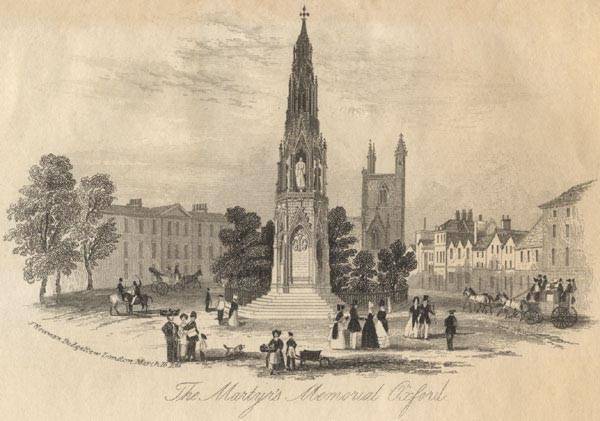