Cathedral Church of Christ in Liverpool was designed by Giles Gilbert Scott in 1904-78, with contributions from George Frederick Bodley until 1907 (completed posthumously under Richard Gilbert Scott, Frederick Thomas and Roger Pinckney)

If Lutyens’ R.C. cathedral had been built, Liverpool would have two of the most gigantic churches in the world. Sadly, it only has the one. This is a building of great sublimity, and a miracle that it was ever completed. It owes much to its site, formerly the spoil heap of a stone quarry, then turned into pleasure gardens. As it looms over the cemetery that now fills the sandstone pit below, it looks as if it has been hewn out of the gaping hole right there and then, the stone given life via Promethean audacity.

In reality the distinctive red sandstone (typical of Cheshire and South Lancashire, part of a belt reaching across Britain from the West Country to Cumbria) was quarried over a lifetime from nearby Woolton, exhausting its quarries. It is more bulk than architectural detail that strikes the beholder. The plan, as it developed, is the highly unusual idea that two sets of transepts buttress the four corners of a crossing, with a bridge between them, which form huge porches. The tower then rises to a huge octagonal stage with a distinctive, crown-like parapet, recognisable from a great distance.

For someone used to cathedral architecture, the experience of the interior is mind-blowing. So tall is the elevation, it is almost impossible for a human to see, but of course, the same criticism can be levelled at the High Gothic, such as Rheims and Cologne. Yet the cathedral is unusual that it does not even have true aisles. It is built in the manner of Albi Cathedral in south-west France, with internal buttressing. 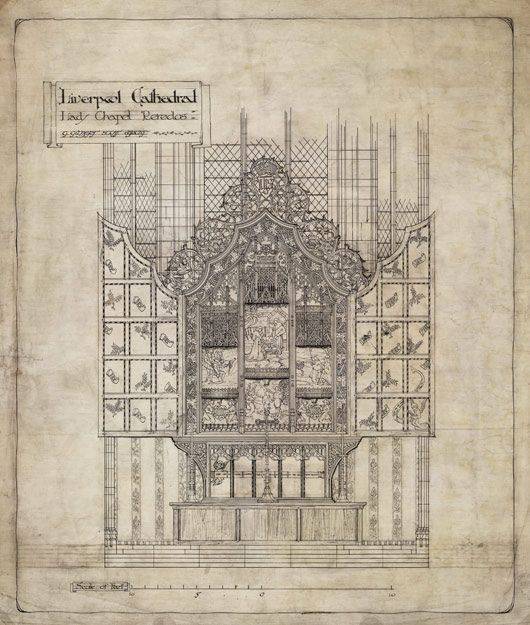 The arcades, such as they are, are basically giant arched niches set in a solid, massively thick wall, with windows set in the back, and a tiny passageway from one to the next. The relatively tiny second storey, little more than a wall-passage with a traceried parapet, is set under the springing of the vault. This is most unlike Albi, which still fits generous clerestory windows into its design. This is a building that could hardly exist before artificial lighting.

The Gothic detail is minimal, just committed enough to seem more than perfunctory. The great east window, with its classic, sprouting, English Decorated tracery, surely due to Bodley rather than Scott. If you want to see the Albi plan with generous fenestration and busy detail there is the delicate Lady Chapel. For the Cathedral proper, like a great jazz musician, you have to listen to what he’s not playing. It is the space under the great central tower which is the absolute climax of the building. Squinch arches – such as usually hidden inside medieval steeples – transition the square crossing to an octagon topped with a star vault. As a practical space, it really only comes into its own for events of supreme national or civic importance. As an inspirational monument, it earns its stripes as the Gothic Revival’s mightiest titan in its twilight years.