Sir George Gilbert Scott was ‘thankful that I escaped in time’ from his partnership with Moffatt, and he congratulated himself that, at the age of thirty-five, he had now begun to thrive. His pride at his own achievements was well-justified. He was the first British architect to win a major international competition and was now very well-known as a church architect. Although the Ecclesiologists had reservations, his work was generally liked and in the following year this feeling of elation must have been given a further boost with his ‘appointment as architect to the refitting &c of Ely Cathedral’ in 1847. This ‘opened out a new field before me’, with the restoration of the great medieval cathedrals becoming a major preoccupation.

He heard the news of his appointment while on holiday in the Lake District with Caroline, where he took her after returning from his sixth trip to Germany in 1847. Scott must have been delighted with the Ely commission and desperate to return. He obviously knew the cathedral after his visit with his oldest brother while he was still at Edmeston’s. Like St. Nicholas, the work was to last for the rest of his life. His appointment probably came through his cousin, John Scott of Hull, who had graduated from Trinity College in 1832, where one of his tutors had been Dr. George Peacock (1791-1858), who in 1839 was appointed Dean of Ely. Peacock was a remarkable man; as well as being a cleric, he was a distinguished philosophical mathematician and astronomer, having worked which such luminaries as Herschel and Babbage. He was interested in classical architecture, but, according to Lord Grimthorpe, who was also one of his students, it was only after he moved to Ely that he was converted to Gothic architecture.

Soon after his appointment Peacock persuaded the Chapter to embark on the restoration of the cathedral. Work was commenced in 1843 under the direct supervision of Peacock himself, who was assisted ‘from time to time by Professor Willis’. Scott admired Willis’s scholarship and says in his lectures at the Royal Academy that his ‘marvellous perception of antiquarian evidence enables him to describe, almost with precision, buildings of which the common observer would conclude that no relic or evidence exists’, and he urges his students to ‘let Professor Willis take a leading place as your instructor’. Scott says that his work on Ely at the start was ‘partial though it increased’ as it went on. His ‘special work’ was the rearrangement of the choir. Scott moved everything to the west forming a two-bay ambulatory behind a new altar. He provided a screen at the west end of the choir, where it opened into the octagonal crossing space, and hung the organ on the north wall of the chancel above the choir stalls. He claimed that ‘the whole space would still, to the eye, be one; indeed the perspective would be lengthened by the intervening object.’ This object was the screen installed in 1851 which he said was ‘the first case in which an open screen had been used in our cathedrals’ and he ‘devoted infinite pains to its design’. Moving the stalls brought about a massive upheaval, including changing floor levels, and set in train a complicated programme involving many of the craftsmen and specialists whom Scott was to employ on many of his later works, including John Birnie, Philip and James Rattee.

Undoubtedly the most distinguished craftsman that Scott used at Ely was Henri Gérente (1814-49) of Paris, who between 1848 and 1849 filled four large Norman windows on the south side of the south transept with excellent stained glass based on thirteenth-century models. Sadly his contact with Scott was all too brief, as he caught cholera and died in 1849. He was succeeded by his younger brother, Alfred Gérente (1821-68), who, Scott says, had been ‘educated as a sculptor – who – has fallen with considerable success his elder brothers grove [sic]’. Alfred continued the work at Ely, with three windows in the south aisle of the nave, two of which he displayed at the Great Exhibition of 1851 and were awarded a Prize Medal. He also carried out other work on Scott’s buildings, particularly the west window of St. Mary’s, Stafford, in 1855.

From 1853 to 1858, Rattee, and eventually Kett, carved the highly ornate reredos for Scott with five compartments filled with alabaster figures by Philip. Scott also designed the Early English style font in the south-west transept in 1853, and the pulpit in the choir which was carved by Rattee’s successors in 1866. In 1853 he designed a monument to Dr Mill, Benjamin’s Webb’s father-in-law, with a copper effigy. Scott re-paved the nave floor, and in 1858 its open timber roof was provided with a ceiling, following the form of the underside of the scissors trusses. Scott says that ‘Under my suggestion & with my cooperation’ it was painted by Henry Styleman Le Strange (1815-62), and he ‘suggested to him that of St Michaels at Hildesheim as a model’ for the design even though the Hildesheim ceiling is flat. Le Strange, who had already painted the ceiling of the western tower, had completed half the nave ceiling by 1861, when he stopped off to do other work, and suddenly died in July 1862. The Dean and Chapter then approached his friend from their school-days at Eton, Thomas Gambier Parry (1816-88), who had just published his investigations into the technique of ‘spirit fresco’ painting. Scott first met Gambier Parry in Venice in 1851, and early in 1863 Parry started work on the ceiling of Ely, using his ‘spirit fresco’ system. He completed it in the following year, and today his work on the eastern portion shows a marked improvement, both in the quality of the painting and its state of preservation, over that of Le Strange to the west. At this stage Scott regarded Parry as one of his ‘valuable acquaintances’.

Dean Peacock had died in 1858, and in 1859 Scott was commissioned to restore the great lantern over the crossing as a memorial to him. Subscriptions totalling £10,000 were raised and the work was carried out between 1861 and 1866. Using old engravings as his authority, Scott reshaped the windows, replaced the pointed pinnacles on top with little battlemented shafts and added flying buttresses. In 1876 work started on the addition of large pinnacles at the lower level and this was still in progress when Scott died in 1878. In 1874 Gambier Parry was invited to decorate the interior of Scott’s new lantern. In the meantime he had painted a chapel at Gloucester Cathedral and had reported on a scheme for decorating the choir vaulting while Scott was carrying out his restoration there. Scott did not think that Parry’s proposal for Gloucester was at all suitable, and said so, so when Parry returned to Ely in 1874, he completely shunned Scott and recommended that the Dean and Chapter should follow suite, which, much to Scott’s satisfaction, they refused to do.

Scott spent over thirty years working on Ely. It was his longest cathedral restoration, and perhaps one of his most successful. Certainly the lantern was literally his crowning glory; and other parts, particularly the interior, are unquestionably better today, than they were before Scott appeared on the scene. His painstaking approach contrasts, perhaps, with some of his later cathedral restorations, where he possibly had less sympathetic clients and more crumbling buildings, but the pattern that he set at Ely was followed in most of the medieval cathedrals of England and Wales. Liturgical reorganisation was often required by the clergy to make the church conform to the Victorian ideals of Anglican worship. For the first time at Ely, Scott used an almost transparent choir screen to produce a visual unity between the choir and the nave, and between the worshippers and the clergy, and yet to retain a small element of mystery. He repeated this feature on most of his later cathedral restorations, with varying degrees of success. Some are still in position, while others have gone completely, either irretrievably lost, or preserved in museums as example of fine Victorian craftsmanship.

Scott in carrying out the essential work of re-ordering and securing these buildings and fitting them with the latest conveniences, like central heating, inevitably produced hard shiny floors and crisp stonework, but the tidying-up process sometimes went beyond reasonable reinstatement, as illustrated by Scott’s desire to make the west front of Ely symmetrical in accordance with the medieval precedent. The success of Ely, compared with his later cathedral restorations, can also be associated with Scott’s personal circumstances. His practice was still relatively small at the start of the work, and he had the time and the energy to devote to its supervision. The railway had arrived at Ely in 1847, so travel was easy, particularly as it was en route for Boston, and possibly Hamburg via Hull. It also helped that he got on well with Peacock, to whom he dedicated his first book , published in 1850. Ely was very important to Scott. It established his claim as a leading church restorer of his time, a field that he was anxious to develop, and his contact with Peacock in 1847 opened up a whole new area of architecture to him. 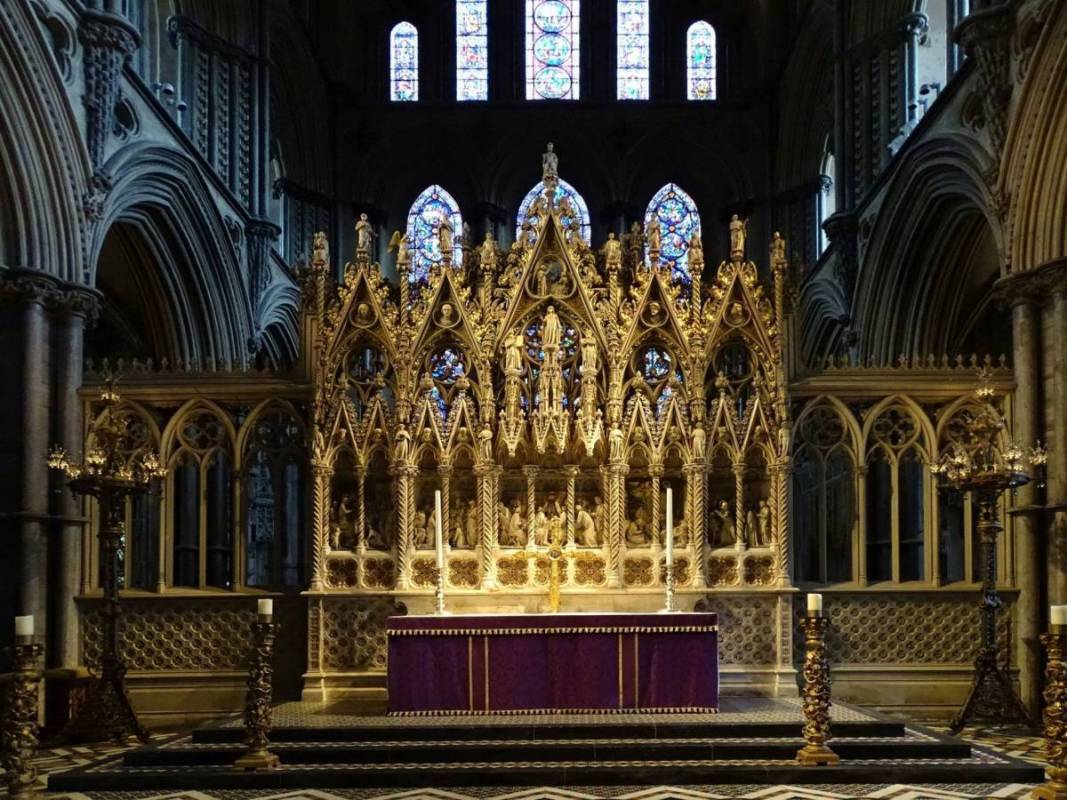