Christ Church, Turnham Green was designed by Scott & Moffat in 1841-3.

An early church, when Scott was still in his business partnership, standing on the eponymous green, pretty as a picture. As many churches of this date, it doesn’t reward much beyond the picturesque. Scott was harder on himself than anyone else less than a wrecking-ball operator:

“the cheap-church rage over-came me, and as I had not then awakened to the viciousness of shams, I was unconscious of the abyss into which I had fallen. These days of abject degradation only lasted for about two years or little more, but alas what a mass of horrors was perpetuated during that short interval!!”

Christ Church is quite unusual for this date for making an attempt to give itself a more medieval surface texture: disguising any use of stock brick with flint and Bath stone dressings. A good idea, but Scott goes a bit over the top and dresses the entire building in it, including the spire. This makes the steeple look rather awkward, like a nervous young clerk in a pinstripe suit at their first day in the office.

Except for the stout, unashamedly High Victorian arcades of the new chancel and north transept chapel added by James Brooks in 1887 to replace Scott’s original pokey apse, everything is a little bit insubstantial, but not as paper-thin as typical commissioners’ churches. There are bits of articulation here and there – a hoodmould over the transept windows and standard E.E. arcades – but there is none of the seemingly effortless grandeur Scott would later produce.

Throughout Sir George Gilbert Scott’s career, many of his buildings had a picturesque relationship with their surrounding landscape. The fact that this happens so often seems to indicate that he deliberately attempted to integrate the design of the buildings with their setting. The three early London churches, are all attractively sited, particularly the last one, Christ Church, Turnham Green, which forms a major landmark in the middle of the central green of Chiswick. The old village of Chiswick, with its medieval parish church, is on the north bank of the Thames, half- a-mile south of Turnham Green. In the 1840’s, this was a rapidly growing out-post of Chiswick from which it was separated by Chiswick House and its grounds. The church cost £6,900, towards which, the Commissioners contributed grant of £500 and the contractor was Bird of Hammersmith. It contained 930 seats and was consecrated by the Bishop of London in July 1843. It is built of flint with stone dressings and, like Shaftesbury, it has short transepts, aisles and a west tower. However, it has no clerestory and the tower, although a similar design, is capped by a flint stone broach spire, the second in the London area. The small octagonal chancel, containing only the communion table, was replaced by a full-scale Victorian chancel in 1887. The architectural style is again the ubiquitous Early English lancet style, which, according to Pevsner, shows Scott as ‘already a competent if uninspired performer’. 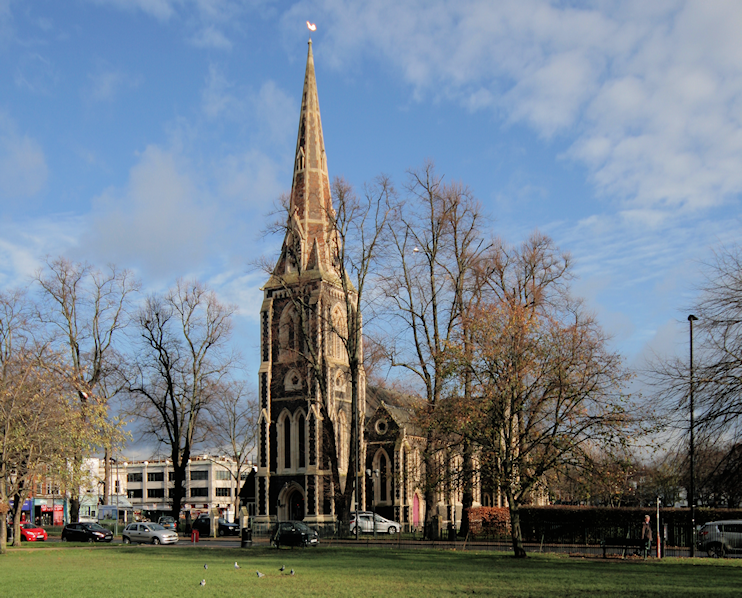