Tucked away in a leafy North London suburb lies the aesthetic gem that is Christ Church Southgate. Designed by Sir George Gilbert Scott and consecrated in 1862, it is a real treat both inside and out.

The Weld Chapel and a brief background.

Before we move to a discussion of the building in its current conception, it is worth knowing a little of the history of the church itself. The site was previously home to a 17th Century wooden structure known as the Weld Chapel (after Sir John and Lady Weld, at whose expense and upon whose grounds it was built). Although Southgate’s own population numbered around 200 at the time of its construction, its populace was obliged to make a three mile walk both to and from the 13th Century church at Edmonton to worship. Whilst such a journey might well be agreeable in the summer months, the same was certainly not true during periods of bad weather. Given this, the decision was made for a Chapel of Ease to be built which the Weld family and their staff could use. As Southgate’s population continued to grow, however, the Weld Chapel quickly became the common place of worship for the local population (although attendance at All Saints for the Easter Eucharist was compulsory).

Thus, despite repeated enlarging and alterations, by the mid-19th Century the population of the area had grown to such an extent that a larger, more permanent structure, was necessary. This, in part, explains the sheer scale of Christ Church in terms of its capacity; as the parties involved were keen that the building be prepared should the population continue to grow. There was, however, another factor at play here. The area had now become home to several mercantile families. The estates of families such as the Walkers and Taylors (both from wealthy brewing backgrounds, as indeed Sir John had been) brought considerable financial power to the project as well as the desire for a monument befitting the families’ status. The 1862 building owes much to the generosity of Mr Isaac Walker and other local gentleman as the project totaled £11,689. 5s. 8p (approximately £700,000 by today’s standards).

It is perhaps ironic that the current building itself is immediately recognisable as the product of one of the greatest architects of the day in Sir George Gilbert Scott, by its totally self-effacing nature. All is impeccably neat and ‘correct’ in both style and ecclesiological principles. Lancets and trefoils are regimentally dispersed along the exterior as you move towards the north-west steeple. This broach spired and exquisitely constructed edifice looms large above the Walker Cricket Ground, and has provided a stunning backdrop to many a titanic contest with the bat and ball over the years.

Some rather uncharitable critics might bemoan that the building itself, with it’s Early English style and constructed from Kentish Rag and Bath Stone dressing, reflects a design simply ‘plopped’ out of the Scott office by an assistant under strict training by Sir George Gilbert Scott. This would appear to miss two rather key points. Firstly, Christ Church was intended to reflect the Medieval Church that Southgate never had; both functionally and stylistically. This in part explains the choice of the less ornate Early English style but also the decision to use pre-Raphaelite artistry from such names as William Morris, Dante Gabriel Rossetti, and Edward Burne-Jones. Furthermore, even if the design is indeed the product of an assistant under supervision, this would not be far from the process that would have been used had the church in fact been constructed in say the 13th Century. In summary, one must not let such views detract from the splendour of this wonderful building.

Before heading through to experience the treasure trove that awaits inside the church, it is worth pausing to note the distinctive aisle window gables along the north wall (mirrored of course on its southern counter-part). Projecting just above the roof-line, these smaller couplets have an almost transformative impact on the interior of the church; in doing so serving as a wondrous example of Sir George Gilbert Scott’s ability to capitalise on space and natural light.

As the sunbeams pour through the gables (particularly on a glorious mid-summer’s eve, as it was when I visited) the full splendour of the interior is revealed. The accentuated expanse of the church is so common a feature of Scott’s work and again makes this such a recognisable product of his craftsmanship. The large arches running through the nave up to the chancel steps are typically gothic in style with their high points springing forth from the five concentric stone rings that form each capital. The rather slim make-up of the pillars only serves to add to the expansive nature of the church, allowing far clearer visuals than a larger alternative might have afforded.

As mentioned previously, the inside of Christ Church is a veritable treasure trove of pre-Raphaelite artistry. Works from Morris, Burne-Jones, and Rossetti are scattered throughout the church to the point at which one may struggle to decide where to begin. If I were to suggest one piece in particular though, it would have to be the depiction of St. Matthew in the Lady Chapel. This piece garners unique prestige by virtue of it being not only the product of William Morris himself but also by the very real possibility that it is something of a self-portrait. Given that the commission came so soon after the firm’s inception, and also given the then amicable relationship between Sir George and Morris, it is almost a certainty that Morris would have taken personal ownership of this particular commission and therefore the portrayal of St. Matthew. I shall leave discussion of the symbolism behind this alleged self-portrait to Morris scholars… 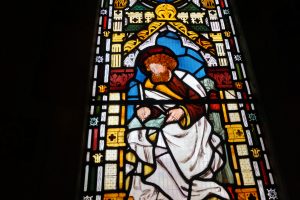 Christ Church survived much of the Second World War unscathed. The only damage sustained was actually something of a case of friendly fire: the shockwaves generated by nearby anti-aircraft guns blew out two of the windows in the chancel. One should also pause to admire the Salviati mosaic reredos, which is quite simply stunning. Again this was a fairly nascent company at the time of the commission and the piece at Christ Church bears remarkable similarity to that which the firm designed for Westminster Abbey. 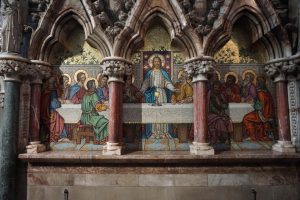 As with all these things there is far too much history for one brief article to cover. I would heartily suggest that any who visit Christ Church seek out the guides by Dora Collins and David Jeeves for a more forensic discussion of the church in all its glory.

In conclusion Christ Church is a treat to the eye both inside and out. The combination of flawless Early English architecture and the wealth of Pre-Raphaelite artistry make Christ Church a true aesthetic delight. It radiates humble spirituality and upon leaving one cannot help but feel a calming wave engulf you as you glance back to see the towering spire rising high above the North London skyline.

My utmost thanks to Fr. Chrichton and Judith Limbert for all of their help and for kindly showing me around Christ Church. You can follow the day to day goings on at the Church at  https://twitter.com/ChristChurchN14 and further information can be found at http://www.christchurch-southgate.org/

Thanks must also go to https://www.wattsandco.com/ who have made this project a possibility and supported my tentative steps into this rich field of architectural history.