Chapel, Harrow School was designed by George Gilbert Scott in 1854-7.

There are two Anglican chaplains that use the Harrow School chapel. Almost 100 boys are confirmed each year and daily attendance is in double figures. The Eucharist is celebrated daily in the Crypt Chapel. Morning Prayer takes place Tuesday to Friday and there is similar provision on a Sunday.

Harrow School Chapel can come as surprise to an ecclesiastical architecture pilgrim, as their trusty Pevsner lists it under the entry on Harrow school and not under the list of Harrow churches. It exerts such a presence on the area, one could easily mistake it for the parish church, that is, if you didn’t know that Harrow-on-the Hill has a medieval parish church. 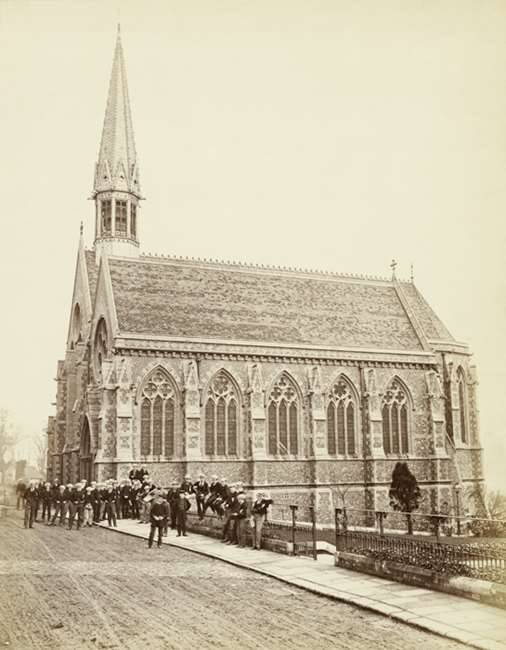 For Gothic this is, but medieval, it is not. With its flurry of buttresses and patterns in the flint and stone dressing, all brims with all the early confidence of High Victorian Gothic. The west front revels in the asymmetry of the aisles: the north lean-to, the south with a gable. Scott’s office returned to add a lead-covered octagonal spirelet in 1865, and some lavishly polychrome marble blind arcade to the inside of the north aisle in ’68, clearly intended to contain memorial tablets. The transepts were put on by Aston Webb in 1902-3.

The interior soars. It is as is someone took the Saint Chapelle in Paris, pulled it apart, and dropped two tall arcades down the middle, such is the feel of a heavenly glass-house. And fortunately, this school clearly had no end of wealthy benefactors to fill the windows. First glazed by William Wailes in 1857-61, although their usual boiled-sweet florescence was toned down somewhat by a “bleaching” in the early twentieth century, it was continued by A. Lusson of Paris – an unusual choice but clearly the school wanting to continue is as traditional a style as possible.